Since five generations in the Italian pharmaceutical packaging industry

Eugenio Favillini, CEO of Favillini Group, takes stock of the evolutions and current criticalities of a sector that has seen the family business among the historical protagonists since 1886.

In the pharmaceutical industry we are used to considering only the chemical sector, which is more closely linked to the compounds and formulas of the drugs themselves. What we do not think about is that the wrapping, or the packaging that contain them, perform an equally important function in the storage and logistical transport of these primary goods. Favillini Group, a historic company in the sector, today boasts a masterful experience, despite the difficulties, including recent ones, along the way.

“Throughout our history, we have always had the goal of achieving the highest quality level, maximum customer satisfaction and zeroing the environmental impact of our production. In fact, we only use 100% certified green energy, coming from production plants from renewable sources such as Energy Current, with which we have entered into a contract. For some years we have also chosen to join various green initiatives: the management system for the chain of custody of the cardboard FSC®, which guarantees the maintenance of the chain of custody of wood from forests managed in a correct and responsible manner, according to rigorous standards. environmental, social and economic, and the ISO 14001: 2015 environmental certification. To date, between Favillini Pharmaceutical Packaging and Ideagrafica, we have approximately 160 employees and two factories, with a total turnover of 27 million euros. We have state-of-the-art machinery and software capable of identifying minimal printing errors, such as Inspection Control, which guarantees maximum control over 100 percent of production, providing a total guarantee for texts created with complex languages, such as Cyrillic. , Arabic or Chinese “.

Important milestones achieved thanks to continuous investments in quality, both technical and human. Crises, however, do not spare even the most solid companies: between the pandemic and the war in Ukraine, Favillini also had his moments of difficulty. “The current conflict in Ukraine exacerbates an already complex situation for the Italian production sector, including the pharmaceutical paper converting sector. The inevitable repercussions of two years of pandemic were not long in coming: the difficulties in finding raw materials and their cost increase, delivery times that were extremely extended compared to the past by the supplier companies, the surge in energy costs and the resulting expensive bills. To all this are added today the further critical issues related to the conflict in Ukraine. The consequences of the conflict and the Covid-19 pandemic have had and are having a strong impact on a global level, partly involving the production activities of the paper converting sector and of our group. The surge in paper and cardboard costs continues. Then there is the shortage of raw materials, a global problem since last autumn, further exacerbated by the new Omicron variant. In mid-January 2022, the main European paper mills were unable to deliver within sixteen to twenty weeks from the order and their cutting centers had a lead time of between four and six weeks. Even this scenario does not foresee any improvements for the moment ».

A problem that involved not only paper, but even more raw material, wood. “Russia, Ukraine and Belarus are among the major timber exporters to Europe. Both due to the drastic reduction in production and the trade and economic sanctions in place, the supplies of timber and pallets from these states are in crisis. The Scandinavian and Baltic countries and Germany are unable to meet the demand of all the importing states. The International Board of Directors of FSC® has decided to suspend all commercial certificates in Russia and Belarus and to block all supplies of wood controlled by the two countries. This implies that wood and forest products from Russia and Belarus cannot be used in FSC® products or sold as FSC® certified anywhere in the world as long as the armed conflict continues. Added to this is the surge in energy prices. The increases have considerable effects both on the aspects linked to production and to the transport of raw materials and products. Unfortunately, also with regard to delivery times, they cannot be similar to before these absolutely out of the ordinary conditions occurred and added to each other, but we are working hard to find the best solutions and deal with the different problems that have emerged, based on mainly on the reading of historical data and forecasts sent by customers “. The decades-long experience, therefore, is a lifeline in stormy times, in which one thinks of the future anyway. «Important technological investments are planned for 2022. The Livorno plant will be equipped with the new Heidelberg Suprasetter 106 CTP, a new printing machine and Epd Certification. As regards the Liscate site, we are planning to create new production spaces and equip the new Ctp Heidelberg Suprasetter 105 and a Heidelberg Speed ​​Master CX 102-6 + UV printing machine ». 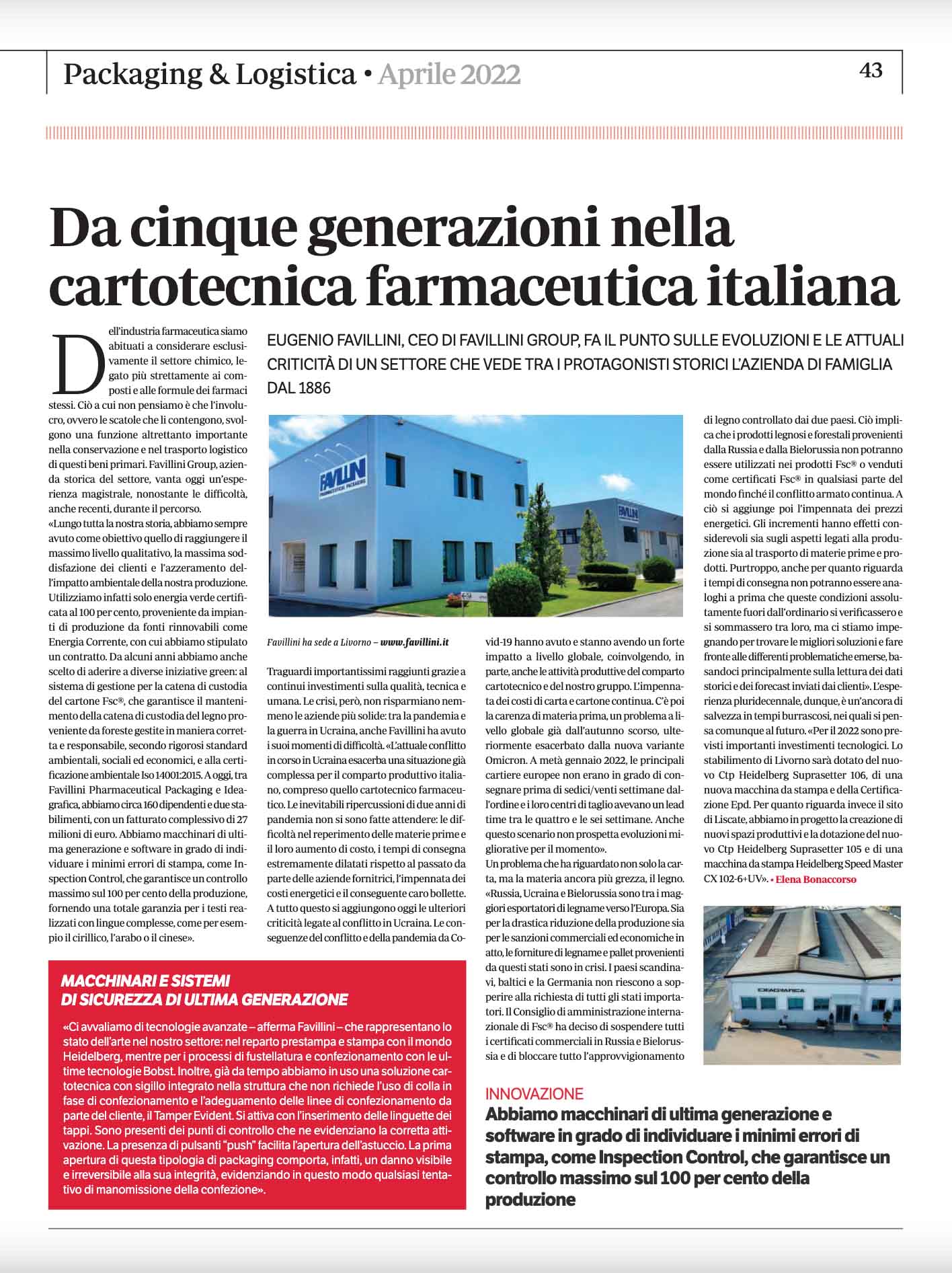 We have state-of-the-art machinery and software capable of identifying minimal printing errors, such as Inspection Control, which guarantees maximum control over 100 percent of production.

“We use advanced technologies – says Favillini – which represent the state of the art in our sector: in the prepress and printing department with the Heidelberg world, while for the die-cutting and packaging processes with the latest Bobst technologies. Furthermore, for some time now we have been using a paper converting solution with a seal integrated into the structure that does not require the use of glue during the packaging phase and the adaptation of the packaging lines by the customer, the Tamper Evident. It is activated by inserting the tabs of the caps. There are control points that highlight the correct activation. The presence of “push” buttons facilitates the opening of the case. The first opening of this type of packaging involves, in fact, a visible and irreversible damage to its integrity, thus highlighting any attempt to tamper with the package ».